This exciting On-screen resource enables children to design and create their own newspaper front page. They are invited to write up three stories from a set of reporters’ notes and quotes, choosing which story to lead with for their particular paper. They will also be asked to think up headlines, choose a photo, add a caption and byline. 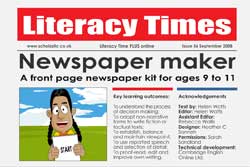