From the crazy to the cute, the unlikely to the action-packed, the judges have read them all. And the winner is… 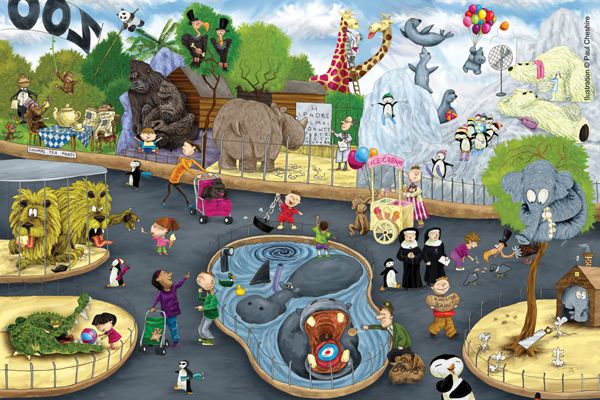 Children used this illustration as inspiration for their story

More than 1000 children entered this age category, and the judges spent the best part of a week reading the entries. They were incredibly impressed with all the children’s work – and suspected that many of the children may turn out to be the next generation of writers!

Some of the more memorable entries included: a Kung-fu panda meeting Jackie Chan; a penguin becoming prime Minister of Poland and solving unemployment; Sharon Osborne signing the zoo up to appear on X-Factor; animals going back to the wild; animals entering the zoo from the wild; penguins becoming nuns; nuns becoming penguins; chimps winning the lottery; penguins actually being super spies from Russia; and blind rhinos.

However, one story stood out from the crowd and that was by Holly Shutter from Moorlands Primary School in Huddersfield.

Holly, aged nine, expressed such a clear voice in her writing style that the judges were gripped from the start when they read ‘The Day I Ran the Zoo’. They also admired the way Holly could sustain a whole story in the first person narrative. The judges agreed the tone of the humour was just right, especially the line, ‘Can I just warn the lady in the cheap orange jumper…’! A real career as an observation writer in the making!

The two runners-up for this category are Catherine Caruth from Leweston Prep School in Dorset and Daniel Hudson from St Wystans School in Derbyshire.

Catherine, aged 11, wrote a moving and mature story about ‘The Little Hippo’ who tied balloons around his body so that he could float up to heaven and visit his father, who had recently died. The judges admired the way Catherine chose to write about a difficult topic – and still ended the story on a positive note.

The other runner-up, Daniel, adopted a wonderfully light-hearted approach when he wrote ‘Make your Mind up Jerry!’ The judges felt the story, about a giraffe who can’t decide what colour his spots should be, would make a wonderful picture book for young children. It really conjured up great visual images in the mind – and it’s quite clear now that giraffes shouldn’t go changing their spots!

The judges also commend the following children for their super stories: