Opinion: Why spelling reform should be at the top of the literacy agenda… 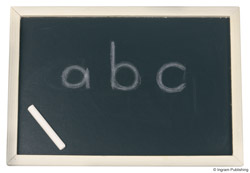 The United States, home to the Spelling Bee competition, performed badly in a spelling test set by the UK-based Spelling Society early this year. The same test was used here in the UK last year – and both sets of results were perturbing.

More than half the adult US population had a problem with one or more spellings of ten everyday words. One in three relied on a spell-checker for tasks such as completing job application forms or writing letters. Education level had little impact, with post-graduate and college students also falling short of expectations.