Poster 1 is presented as a newspaper report about the theft of a diamond. It displays typical newspaper features and illustrates the report style of writing. The same news story is also presented as a television news broadcast in On-screen resource 1 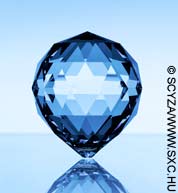