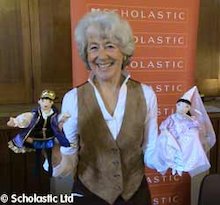 Brenda Williams is a name already well known to Literacy Time PLUS subscribers – she has wrritten many poems and stories for the series, including the audio tale and poem The Thunder Giant for ages 5 to 7 and The Coming of the Iron Man (ages 7 to 9).

This weekend, it was the turn of young visitors to the Warwick Words literary festival to be captivated by her storytelling. Brenda came along to a brand new part of the festival – Young Words – to read her latest story The Real Princess, A Mathemagical Tale, bringing the pages of her book to life using puppets and dolls.

The storytelling session was sponsored by Scholastic Ltd, and Helen Watts, Editor of Literacy Time PLUS, was there to film the event for use on the website next year. She explained:

“Brenda has already written some lovely resources for us, so it was great to watch her performing this lovely new tale. This is the first non-rhyming children’s story that Brenda has had published, and it’s a real treasure of a book. It offers a fresh slant on the well-known traditional tale ‘The Princess and the Pea’ – and young readers will love getting involved with the story and trying some mathemagical counting along the way.”

“Next May we are planning an issue of Literacy Time PLUS on the theme of Castles, for children aged 5 to 7, and I am delighted to say that Brenda has agreed to write an original story for us for that issue.”

Filmclips of Brenda appearing at Warwick Words will be published on the website to complement that issue – so everyone can see her in action.

Warwick Words 2008 took place at various venues in Warwick from 2nd to 5th October and featured appearances from some best-selling writers and top literary names, including Louis de Bernieres, Felix Dennis, Andrew Davies, Frances Fyfield and Charley Boorman, back from his travels from Ireland to Australia ‘By Any Means’ and selling out his session on the last night of the festival.

Appearing in ‘Young Words’ were Brian Patten, former Newsround and Breakfast Time reporter, Jill Fraser, and Horrible Science illustrator Tony de Saulles. Children could also come along to a Pirate Bookstart Party, a Pippi Longstocking party or a craft session with The Art Angels where they could make some medieval shields and pennants.