Explore ideas for a teaching style that will inspire all learners 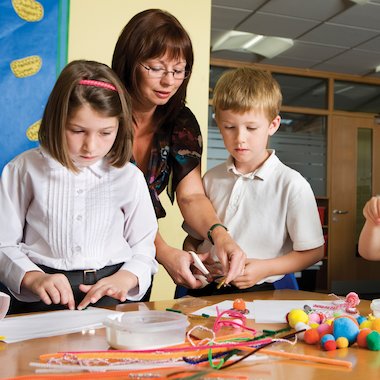 A quick scan of your classroom will no doubt confirm the theory that children learn in different ways. There’s John, who likes to sit away from the noisy children, quietly chatting to himself as he completes his sums. Then there’s Lena, who wants to be in the thick of the action, talking constantly as she tells everyone else what to do. There’s Luke, whose exercise books are full of doodles, and who everyone says has a real talent for art. Finally, there’s Jasmine, who very rarely stays in her seat for more than a couple of minutes, and who loves getting hands-on in science activities.

The idea that learners have different ‘styles’ of learning is a fairly recent one. It’s an idea that has quickly come to be accepted within the educational community, probably because common sense and the everyday experience of teachers confirms it. Learning-styles theories offer a contrast to ‘traditional’ methods of teaching – the whole-class, ‘chalk and talk’ approaches that were widespread only a few decades ago. The problem with traditional teaching methods was that they appealed to only one type of learner: those children who were skilled at hearing the spoken word and writing it down. Children who were more inclined towards kinaesthetic or visual activities often found it hard to learn effectively in this kind of class.

In the 1970s and 1980s, various new schools of thought about how people learn came to prominence. The American professor, Howard Gardner, proposed that there are ‘multiple intelligences’: that human beings have many different forms of intelligence, in a variety of combinations. The seven intelligences Gardner originally proposed included logical-mathematical, visual-spatial, bodily-kinaesthetic, and linguistic. David Kolb, an American educational theorist, developed the notion of a ‘Learning Style Inventory’ – a way of working out an individual’s preferred learning style.

The idea of different ‘styles’ of learning was further developed by Peter Honey and Alan Mumford. Their four suggested learning styles were the activist, reflector, theorist and pragmatist. They developed a ‘learning styles questionnaire’, as a way of encouraging learners to assess their own preferred methods of learning. You’ll also come across the terms ‘accelerated learning’ and ‘brain based learning’ in relation to learning styles – ideas about how to get people learning more efficiently and effectively. In schools, the three main styles of learning are often referred to as VAK – visual, auditory and kinaesthetic – as a reminder for teachers to incorporate multi sensory activities in their lessons.