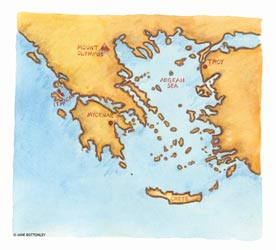 The Trojan War was more than just a legendary battle from ancient history. It was a glorious victory for the Ancient Greeks that captured, and perpetuated, their high ideals, powerful aspirations and enduring spirit. The war displayed their strength, confirmed their authority and spread their influence.

The war also provided the backdrop for a rich collection of wonderful myths, stories and poems featuring well-known characters – the goddess of love, Aphrodite; the heroic Odysseus; the lovers, Paris and Helen – who started it all, and the huge wooden horse that finally brought the ten-year war to an end.

The city of Troy lay across the Aegean Sea from Greece, in what is now Turkey. Whatever the reason for the war – to plunder the city for its wealth and treasure, or to return Helen to her rightful husband – there’s no doubt that it was one of the most exciting and cunning military contests of all time. There’s also no doubt that it did take place. German archaeologist, Heinrich Schliemann, proved that once and for all when he found the lost city of Troy and its treasures in 1870. He was following clues contained in an epic poem about the war, called the Illiad, which was written by the great Ancient Greek poet.

Homer lived around 800 BC, roughly 400 years after the Trojan War had finished, but the stories he had heard as a boy about the great Greek victory fired his imagination. His poem is set during the last year of the war and is mostly about the contests between the warriors, particularly the fight between the Greek hero, Achilles, and the Trojan prince, Hector.

Teaching about the Trojan War

The story of the Trojan War has survived for more than 3000 years, to become one of the classic events in human history. Finding their own way around what happened in Troy all those years ago by reading stories, researching drawings and artefacts and interpreting events in creative and innovative ways, eases children into a complex, but fascinating subject in an exciting and unforgettable way. Try to provide them with as many of the stories connected to the Trojan War as possible (see Activity sheet 2, ‘Web of stories’ for examples). Concentrating on the wealth of stories that it inspired, comparing them with the evidence, and locating when and where the war took place, will provide valuable links between literacy and history.

Homer signals Hector’s death as the beginning of Troy’s downfall. He also confirms that the war began after Helen eloped with Paris, but he doesn’t mention the wooden horse. That story comes from the Roman poet Virgil, who was born in 70 BC and therefore writing many centuries after the war. Virgil’s story is about the Trojan warrior Aeneas, who escaped from burning Troy and became the founder of Rome. In Virgil’s story, one of those soldiers hidden inside the horse was Helen’s husband, King Menelaus.