St Patrick is the Patron Saint of Ireland and his feast day is celebrated on 17th March. He was born in Britain, but was captured by Irish raiders and spent six years in slavery in Ireland. He escaped and returned to his family and joined the Church. He returned to Ireland as a missionary, and although little is known of his work, by 8th century he had become the Patron Saint of Ireland. He has, however, never been canonised by a Pope.

Of the many myths and legends surrounding St Patrick, the two most famous are that he banished all snakes from Ireland and that he used the shamrock plant to illustrate the Holy Trinity in his teachings.

It is the custom in Ireland to wear shamrocks on the national day together with green clothing. Many cities all over the world (New York, Birmingham) hold parades to celebrate St Patrick’s Day and there is a great party atmosphere.

Leprechauns and the Banshee are two of the most famous Irish myths. 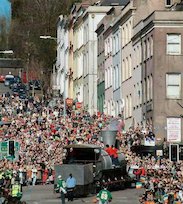