Valentine’s Day started in Roman times as a holiday in honour of Juno. Juno was the Queen of the Roman Gods and Goddesses and the Goddess of women and marriage.

During the rule of Emperor Claudius II all marriages and engagements in Rome were cancelled to encourage young men to join the army and take part in the many conflicts of the time. Saint Valentine was a priest in Rome and he and Saint Marius helped the Christian martyrs and secretly married couples against the wishes of the Emperor. Saint Valentine was arrested and condemned to death. He executed on the 14th day of February, circa 270. He was one of three Valentines to be martyred on this day.

In country lore, 14th February is said to be the day birds found a mate. 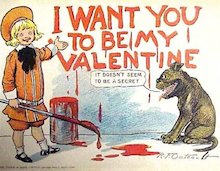 Valentine Cards have been popular since the 1800s. Today Valentine’s Day is the second largest card festival after Christmas with millions of cards being sent.

Love Spoons. In Wales, carved love-spoons were given as gifts. Decorated with hearts, keys and padlocks representing the unlocking of the heart.

Flowers. Many give flowers on Valentine’s Day and each flower has its own meaning: 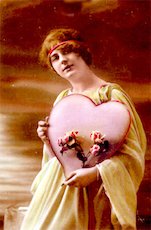