One music company is rescuing old singing games and bringing them back into the classroom. A success? You better believe it! 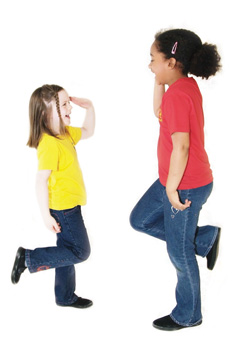 Whenever I walk into a Key Stage 1 classroom and ask, Who likes music? Who likes games? – invariably nearly every hand shoots up. That is why singing games work so well, because they are a magical combination of both. As the children become motivated by the games, they do not realise the numerous musical skills they are learning. Just playing one game can cover so many areas of the National Curriculum. Also, if you are uncomfortable with musical jargon, you will find it a far less intimidating prospect when it is turned into a game.

Singing games are a kinaesthetic way to learn, involving simultaneous sound and movement. They help children develop important thinking skills, including memory, sequencing and concentration; physical skills such as motor skills and coordination; and they harness children’s innate creativity in improvisation and role playing.

Singing games provide an invaluable repertoire for Primary Music. We sing all our games unaccompanied. This not only helps children develop confidence in their own voices, but also means we can easily play a game without fiddling around with CD players. In fact, most of the games need very little equipment. A selection of ideas follow, which cover some of the main aspects of the National Curriculum for music at Key Stage 1, using singing and action games.

To experience a clear, steady pulse is the first step in building musical skills. The song, ‘William He Had Seven Sons’ involves following sequences of movements to the pulse, while songs such as ‘Johnny Works with One Hammer’, involve accumulative actions to the pulse.

In both songs, the children experience a regular pulse for a prolonged period, while focusing on the game.

Rhythm is the next step. With some songs, rhythm patterns are an integral part of the game. With others, the rhythm of the games can be used to develop skills further.